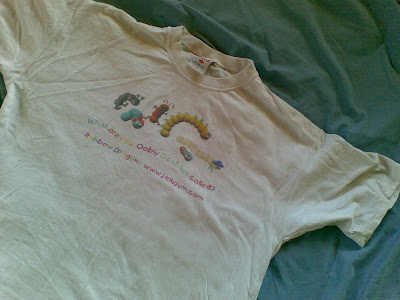 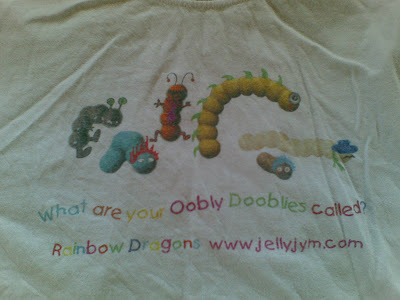 The Oobly Dooblies are part of Rainbow Dragons. They are jumping, bumping, squeaking, sneaking, grooving 'things' of different colours and textures. They are a device for representing number. Without ever mentioning one, two or three young children will literally 'see' (and 'feel' if they have the toys) numbers in action solving everyday problems during Rainbow Dragons stories. The kids can manipulate these creatures with their hands or in a virtual space to get a better understanding of them and put their very own dressed up set into action for them in many different puzzles and games . The kids may even incorporate the Oobly Dooblies into their mental mathematics (ie what is worked out in their heads.) Here is my Oobly Dooblies T-shirt. (And no I don't know what an iron is. My passion for the idea gets the creases out when I wear it!) For the record MY Oobly Dooblies are called:
Bop
Squeak
Iggle
Bounce
Squiffle
Bummy
Rolley
Orange
Pearly
Long Tall Sally Yellow

To name yours watch the Rainbow Dragons promo (scroll down the posts or go to Jelly Jym at BlipTV .)
Posted by Kate Vyvyan at 4:50 PM No comments:

Last week I contributed to a workshop for the development of a pre preschool series - Gracie Lou. Gracie Lou is originally the creation of Graphic Designers Helen and Darren Simpson. They made it for their daughters. When they teamed up with Two Camels Music in London they ended up with animated nursery rhymes which are being distributed by the ABC. Darren has now teamed up with kids TV producer Susie Campbell to develop it into a series.
The show is aimed at kids aged 0-3 years old. This is a potential new growth area, as baby TV channels spring up all over the world. Whatever you may think of children this age watching television, they are watching this young, so it would be better if what they were viewing was aimed at them. There are a number of preschool shows that arguably children grow out of, or get bored of, by the time they are three anyhow. Zero to six is a big age range for children that are going through such massive development so it is actually great to be able to focus in on the delightfulness of three year olds or two year olds or even one years olds (and having one of those myself at the moment I am particularly focused on that.) The workshop was a great excuse to explore these age groups. I am quite inspired to explore aiming younger with some series concepts myself. I was particularly impressed by our visit to Nedlands School of Early Learning and the woman behind that Sarah Lovegrove.
Gracie Lou has a very simple graphic look and animation style, check it out, I have linked to it. I will keep you updated as to it's progress but it is not up to me to tell you the great ideas we came up for for it except to say it celebrates everyday achievement moments of three year olds!
Posted by Kate Vyvyan at 8:41 PM No comments: